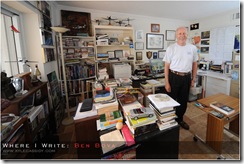 I’ve always loved the Librarian’s Desks flickr group. Here’s a set of photos titled "Where I Write”, photos of SF & Fantasy authors in their writing environments.

Where I Write will be featured as eight pages in the 2009 Worldcon program guide. A much larger collection is being compiled into a book featuring Neil Gaiman, Lois McMaster Bujold, and many others along with interviews about their spaces.

Sign me up. This is a book I’ll be ordering as soon as its available.