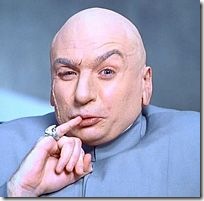 Ok, I exaggerate a little but this is getting a smidge ridiculous. The MPAA is demanding $15.4 million from The Pirate Bay to "cover the damages they suffered from 4 movies and 13 TV-episodes that were made available via the popular BitTorrent tracker". Sorry, but by that logic, never mind the insane math involved in coming up with that number, the MPAA should be suing Google too since I can find torrents of The Pink Panther via their search engine too.

Pirate Bay’s response: “The worst thing is that I lost 100 kronor on a bet on the number they would come up with,” Sunde added. “And, it sucks that they didn’t claim more than for Napster and the other sites. It’s cooler to break the record.”