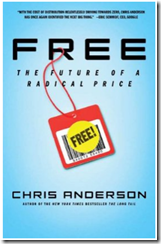 The New York Times bestselling author heralds the future of business in Free.

In his revolutionary bestseller, The Long Tail, Chris Anderson demonstrated how the online marketplace creates niche markets, allowing products and consumers to connect in a way that has never been possible before. Now, in Free, he makes the compelling case that in many instances businesses can profit more from giving things away than they can by charging for them. Far more than a promotional gimmick, Free is a business strategy that may well be essential to a company’s survival.

The costs associated with the growing online economy are trending toward zero at an incredible rate. Never in the course of human history have the primary inputs to an industrial economy fallen in price so fast and for so long. Just think that in 1961, a single transistor cost $10; now Intel’s latest chip has two billion transistors and sells for $300 (or 0.000015 cents per transistor–effectively too cheap to price). The traditional economics of scarcity just don’t apply to bandwidth, processing power, and hard-drive storage.

Yet this is just one engine behind the new Free, a reality that goes beyond a marketing gimmick or a cross-subsidy. Anderson also points to the growth of the reputation economy; explains different models for unleashing the power of Free; and shows how to compete when your competitors are giving away what you’re trying to sell.

In Free, Chris Anderson explores this radical idea for the new global economy and demonstrates how this revolutionary price can be harnessed for the benefit of consumers and businesses alike.

2 Replies to “Free for Free”